This paper gives an overview of Juhan Liiv's (1864–1913) poetic analysis and concludes that Liiv's observa­tions form a clear aesthetic framework, a claim that subverts the general cultural depiction of Liiv as a weak-minded poet with a tragic destiny. However, one could argue that the clarity and strictness of Liiv's poetic comprehension has been greatly underestimated – a comprehension that is especially direct and profound in his essay ”Marginalia“ (”Ääremärkused“).

In the first section, the author observes how Liiv's artistic sense has been viewed in earlier interpretations. Although Liiv's artistic perceptions were analyzed to some degree by Friedebert Tuglas, the first important researcher of Liiv's work, they have gained ground in the new millennium with the work of Jüri Talvet, whose selection of verses and fragments of Liiv’s poetry show Liiv’s poetic understanding in a new light.

The second section maps the manifestations of Liiv’s viewpoints, which are also reflected outside of Liiv’s poetic creations. From the perspective of poetic analysis, ”Marginalia“, written in the final years of his life, conceptualizes poetry much more than any of his previous work, but because the manuscript has received less attention, it is not considered to be the heart of Liiv’s canon. This paper thus aggregates Liiv’s artistic observa­tions of his remaining work into one system.

The third section focuses on the interpretation of ”Marginalia“, drawing from the manuscript since the essay itself was published only as excerpts. Vague and ambiguous imagery has been a defining feature of Liiv’s literary style, which has often confused readers, but he consistently uses basic forms of expression and few concepts in his discussion. As a whole, ”Marginalia“ follows a logical train of thought to highlight Liiv’s core viewpoints and describes principles and poetic techniques that are useful for nurturing the effects of poetic content.

This paper’s fourth section observes Liiv’s understanding of aesthetics. Since Liiv’s poetry is considered improvisational, his strict poetic observations are surprising, and while his train of thought loosely follows that of realism, it does not adhere to the canon of realism. Liiv suggests that to best portray an experience in poetry, one must depict the object of that experience as clearly as possible. Life, then, must be depicted as realistically as possible to most efficiently communicate the described experience and thus increase the impact of poetry. Therefore, it is pointless to view Liiv’s aesthetic principles as canonized aesthetic comprehension, but rather as a representation of the inner workings of his thoughts based on the points he has stressed. This interpreta­tion of poetics encourages a depiction of only the most shallow aspects of life, and as such, one could consider Liiv’s aesthetic interpretations to be the aesthetics of poverty.

The final section of this paper deals with Liiv’s understanding of poetics. When observing poetry in ”Marginalia“, Liiv first examines the smallest poetic unit—the poetic word—and then attempts to define poetic wording. According to Liiv, the most important function of the poetic word is the referential function, and the poetic function is only as important as its ability to amplify the referential function of a word. He claims that it is unnecessary to distinguish a word with poetic devices or highlight the wording of the poem itself; rather, words should be made invisible in order to bring their meaning to the foreground. The poetic function aims to simplify word use and applies to an entire poem: just as an individual word should be simple and referential, so too must the whole of the poem and its expression.

Liiv also analyses how to use specific poetic devices to achieve simplicity in expression. He stresses the ”plasticity“ of expression as an integral means of communicating the experience one wishes to portray and exemplifies this idea in a section of his essay detailing poetic technique and imagery in which he describes how to clearly and exactly express ”plastic“ depictions in poetics. First he argues the necessity of a cornerstone image, meaning the ability to create space for that which is being described, thereby allowing the image in a piece to work. He also draws attention to the importance of contrast in poetry, which occurs with the use of two poetic techniques that he calls ”subtraction“ and ”addition.“ With subtraction, one presents the concepts individually in order for them to have greater poetic influence; whereas, with addition, these individual images are presented together. Liiv’s handling of poetic language could be called simplified poetics, as the significance of art is hidden in its simplicity. Simplified poetics works in combination with his broader aesthetic framework: the goal is to portray simple things using intrinsically simple and influencial expressions.

Tanar Kirs – MA in Literature and Theater studies. He is working at the University of Tartu Library and at the Liiv Museum. He is researching the poetical work of Juhan Liiv and the beginning of Estonian poetry in general. 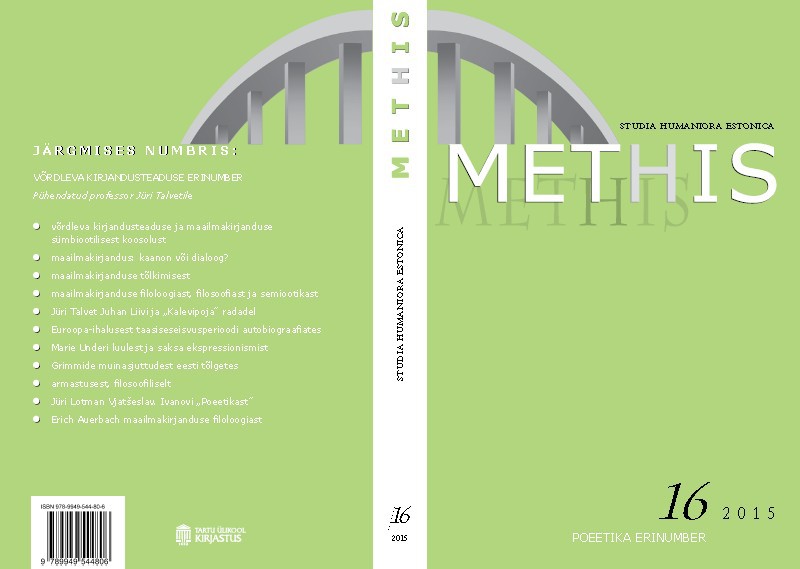