Methis is a new quarterly journal of literary and cultural studies in Estonia, a collaborative publication of the Department of Literature and Theatre Research of the University of Tartu and the Estonian Literary Museum. Its predecessors were series of collections of articles “Studia litteraria estonica“ of the Chair of Estonian Literature of the University of Tartu, and series such as “Tradition and pluralism”, and “Accommodating Texts” of the Estonian Literary Museum. With due respect to its genealogy, the purpose of Methis is to provide a new forum for publication by young and established scholars, balancing between international and Estonian-language readerships. Since any new periodical is fraught with risk, especially in a country where the scholarly base is small, it is crucial to take the measure of the landscape, both in the homeland and in Europe. The pressures of publishing must take into account perils and perishing, both on the level of individual scholars and their institutions. Methis is primarily and philosophically committed to peer-reviewed publishing in the Estonian language. The editorial board sees this not as a symptom of insularity, but rather as a deep, intentional investment in the cultivation of scholarly Estonian as a flexible, rich medium for scientific expression and communication at a level in keeping with the highest international standards. The first double issue of Methis, published in December 2008 under the editorship of Dr. Marin Laak and Dr. Sirje Olesk, was devoted to the Young Estonia movement of the last decades of the 19th century and the opening decade of the 20th – a time of crucial self-positioning of Estonian scholars, thinkers and activists with respect to the Europe they both imagined and encountered in their peregrinations and political exile. It is, however highly and fortunately symbolic of Methis’ position in Estonian letters that this issue is published in English, and that it commemorates another important anniversary in Estonian cultural history. The editors, Dr. Luule Epner, and Dr. Anneli Saro, have elicited and prepared a very fine selection of articles based on papers given at a conference in December 2006 devoted to the 100th anniversary of the first professional theatres in Estonia. We anticipate that the future of Methis will entail other such occasions for English-language special issues and clusters of articles. 6 As with any new venture, Methis has already encountered controversy – particularly about its name, the choice of which entailed a tension between pure loyalty to long humanistic traditions and pragmatism. Metis is the mythological mother of Athena, and the symbolism of this lineage is connected with Tartu, a historic university city, referred to frequently with the locution “Emajõe Ateena” (“Athena on the Banks of the River Emajõgi“). The “Tartu spirit”, whether it is a figure for intellectual passion or a haunting of the past (or the name given to a very peppery chocolate truffle in one of Tartu’s famous cafes) is part folklore and part ideology. We hope that on the pages of this journal, it will be “catching” in the best sense of that word. Scholarly wisdom, championed by Athena, needs nurture and protection, perhaps especially these days, when the heat of institutional production requirements and bureaucratic quotas threaten to overpower the coolness, caution, slow absorption, meticulous tending and acumen of real scholarship. As a journal, Methis seeks to honour the solicitude of its mythological patroness. However, many of our colleagues in Classical Studies have been quite vocal about the extra letter in the name of our journal. While their objections are certainly justified, there is no gratuitous playfulness in the extra letter “H“. Since another European journal of the humanities already exists under the name Metis, we merely wished to avoid confusion. While many of the forthcoming issues of Methis will be topical or thematic, at least every fourth issue will be a multi-topic or free issue. Methis 4 (2009), our first free issue, will be edited by Andrus Org, a lecturer in Estonian literature at the University of Tartu, and it will expand the full repertoire of regular features. In addition to the book reviews in Methis 3 (2009), each of the following issues will contain translations into Estonian of theoretical and methodological articles in literary and cultural studies, and publication of archival source material. The editorial board of Methis is grateful to the Estonian Ministry of Education and Research, the Estonian Cultural Endowment, and the Publications Committee of the University of Tartu for ongoing financial support. 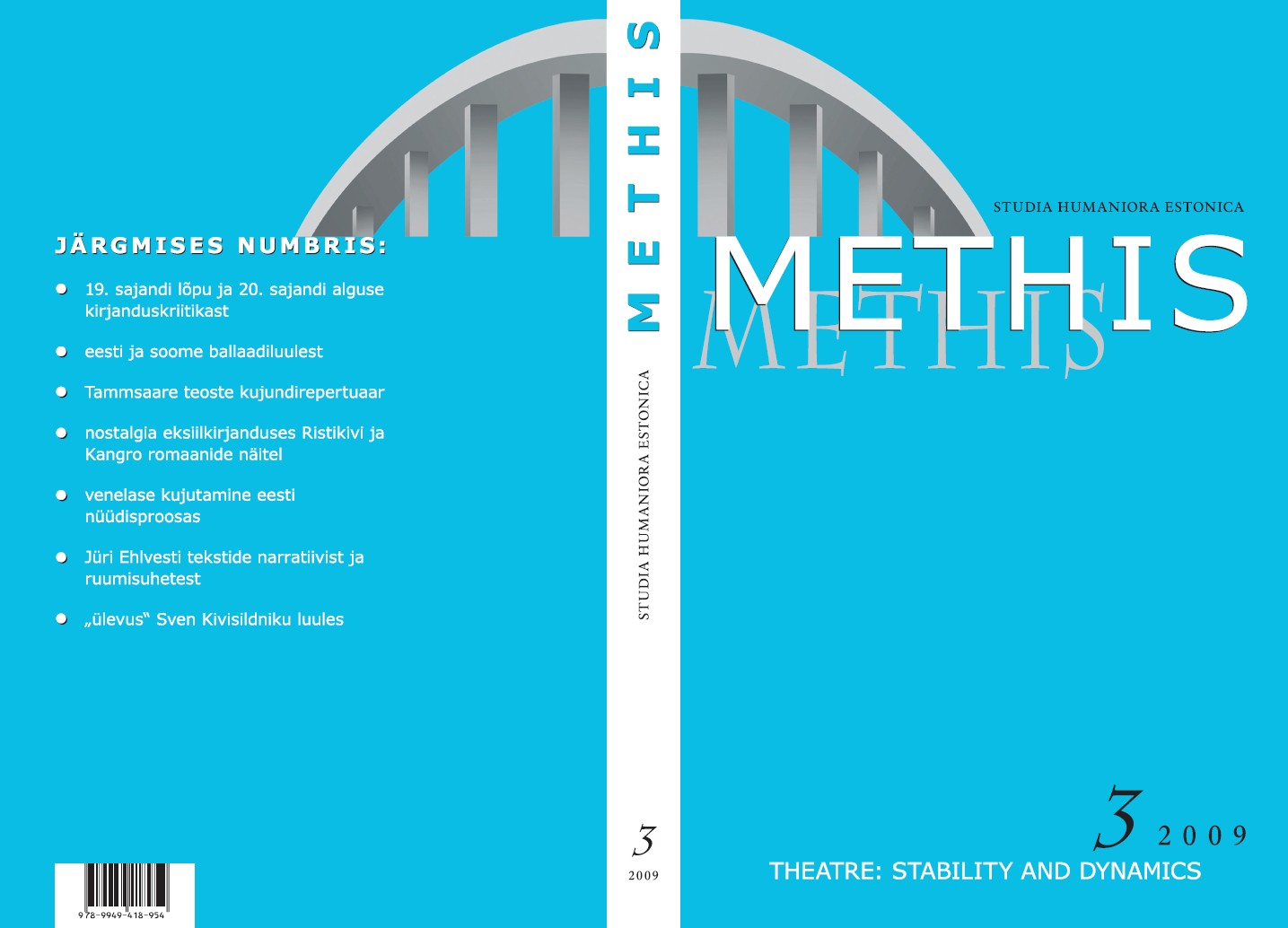