Here we present a translation of paragraphs concerning the saunas of the Estonians, Livonians and Latvians, as described in the Doctoral thesis “Bastu och torkhus i Nordeuropa” (“Saun ja kuivati Põhja-Euroopas”, 1960) written by the ethnographer and writer llmar Talve, who studied the culture and history of various nations. The Doctoral thesis summarises ethnographical sources describing saunas assembled mainly during the time of the Republic of Estonia (1918–1940), providing also a comprehensible overview for the Swedes.

In Sweden, Talve mainly worked with local ethnographical materials, integrating it with his interest in Estonian ethnography. It may be assumed that the central barnhouse theme in Estonian farm architecture encouraged Talve to study heated ancillary buildings in rural areas in Sweden and neighbouring countries more thoroughly. In 1960, a thorough research paper containing two parts was completed, of which one part (his Doctoral thesis of 1960) focused on the saunas and driers of Northern Europe, while the other part focused on threshing barns in North-East Europe (“Den nordost-europeiska rian: en etnologisk undersökning”, published in 1961). In both parts, references to Estonian vernacular architecture can be found.

In his Doctoral thesis, Talve explained that he focused on ethnographic auxiliary buildings of Sweden and other northern countries (primarily in Norway and Finland) used for drying and washing like bastu (‘drier’ or also a ‘washing house’) and kölna (‘grain drier’). He wanted to study their historical development, their various types, layout solutions, constructions, heating appliances, functions and other ethnological data. Buildings constructed during the period of 1850–1900 were the ones observed.

He used comparative examples of architectural heritage in several other European and nearby areas in order to make conclusions about different aspects of the construction and the usage history of saunas and driers.

The main source for the ethnographical study is material collected from country people during the first decades of the 20th century. The author used archive materials from Norway and Finland (data from fieldwork, questionnaire sheets) and his own field work materials. For other regions, he used the existing and available literature.

In case of the Doctoral thesis concerning mainly Sweden, Finland and Norway, it is important for us to trace the difference between the words denoting the sauna. While the Finnish word sauna means a washing sauna familiar to us, then the Swedish bastu may historically mean a building for drying agricultural products as well as the washing sauna. The latter was rather rare in Sweden. To distinguish the function of washing one’s body in the auxiliary building, in his Doctoral thesis Talve used the term badbastu – washing sauna. The situation was similar with the threshing barns: for Swedes, rian denotes a threshing barn, not the multifunctional barnhouse as we know it. In Sweden village life was conducted differently.

In addition to the name of the building, he also gathered information about its position in the farm yard, the material of its walls, saunas dug in the ground, anteroom or its absence, building a sauna together with auxiliary buildings, the shape and the covering material of the roof, the most widespread solutions of ceilings and floors, the method of letting smoke out, the location of the bathhouse platform and the pile of stones on top of the stove, the location of the hearth opening, and the details of piling the stones.

An overview of sauna usage then follows: when was the sauna used (by days of the week and according to holidays), family traditions: did men and women go to sauna separately or all together, the sauna as a place for ritual washing, healing and giving birth. Smoking meat, using the sauna as a dwelling and a shed for animals, one sauna used by several families and a place where young people came together (kildsann, istjad). An overview is given of the information in earlier written sources, comprising very interesting information about older saunas located in towns.

The same plan is followed in the overview of Livonian and Latvian saunas, depending naturally on the reference sources available to the author at that time.

If you are interested to know more of Ilmar Talve’s work dedicated to the Estonian sauna, you may read his book “Virolainen sauna” (“Estonian sauna”), which was published in 1960 – the same year as his Doctoral thesis – in the University of Turku. 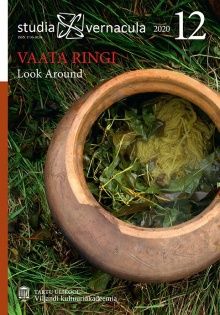