The making of rep weave floor coverings was an important source of income in Avinurme, a northern Estonian settlement, from the 1950s to the 1970s. Weaving began for commercial reasons after collective farms were established in 1949, when alternative sources of income were sought, as such farms only paid meagre wages. At the time, any sort of entrepreneurship was prohibited and punishable as “speculation”, and thus sales activities were banned, so the sellers sought to leave village council inspectors with the impression that the weaving was being done for their own families. A unique cultural phenomenon thus developed which was shaped (and eventually fell into decline) for the following period-specific reasons: cotton yarn which was suited to the rep weaving technique could be obtained from the Kreenholm Manufactory in Narva, floor rugs were not available in shops, all households had looms, and rep weave rugs were considered to be classier than rag rugs. Despite the illegality of the activity, commercial weaving persisted for decades. Due to the wide territorial range of the sales, the Avinurme rugs had an impact on home furnishing culture throughout most of Estonia.
The special feature of the Avinurme practice was the use of a thinner and finer pattern warp (the so-called No. 10 thread) in conjunction with a thicker and coarser background warp; the dark weft is visible through the thin warp and is conducive to the formation of the pattern. Other features peculiar to the Avinurme rep woven rugs include composition featuring a double cross of rhombuses, which cannot be found in any printed source. In addition, the region in question had a rich array of patterns which combine squares and rectangles. Brown was often featured as the warp colour in combination with beige or orange tones; the background warp was frequently made up of brightly coloured lengthwise-striped patterns along the patterned edges.  The tradition of weaving these types of rugs and mats started to decline in the late 1970s when industrially produced floor coverings became available in retail stores, leading to changes in interior furnishing fashions. Purchasing power had also improved over the decades, and handwoven traditional floor coverings were seen as old-fashioned in this context. 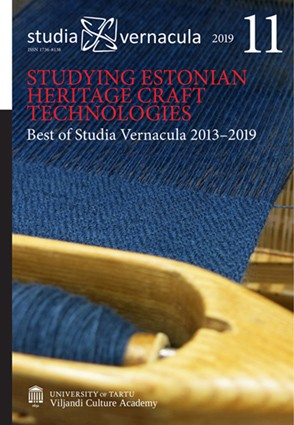