The Independence of the Judiciary: Meaning and Threats

What an ‘independent’ judiciary means in a democratic society is a complex question, bringing in such elements as the governing of high courts, recruitment of judges, and their susceptibility to disciplinary action. Those subjects are not isolated items but components of a wider system, with its functioning ruled by political principles. Therefore, it is essential to identify the ideological conceptions beneath the diverse theses offered. The paper examines recent events in Poland and Spain that offer valuable data to illustrate the problem. In synthesis, two broad theoretical tendencies emerge: on one side, judges ought to be controlled by politicians, at least to a certain extent, in aims of safeguarding the democratic foundations of the Constitutional legal frame; on the other side, the emphasis is on judicial self-government as a means of preserving courts from corruption associated with pressure exerted by political, economic, or social lobbies. The paper presents a proposed solution to the controversy, involving characterisation of the minimum standards for a free judiciary in a democratic legal order, and for detecting the risks inherent to both politicisation and corporatism. The model is constructed by means of legal methodology that entails comparison among legal systems of different sorts in light of international documents, among them reports by the Council of Europe. A particularly significant contrast is visible in the distance between Continental and Common Law traditions, illuminated via consideration also of the United States. 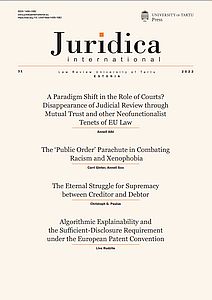