Reform of Land Registration in Latvia

The principle of superficies solo cedit is prescribed by Section 968 of the Latvian Civil Law: ‘A building erected on land and firmly attached to it shall be recognised as a part thereof.’

The law ‘On Time and Procedures for Coming into Force of Introduction, Inheritance and Property Law Part of the Renewed Civil Law of the Republic of Latvia dated 1937 of 7 July’, effective since 1 September 1992, applied several exceptions to Section 968 of the Latvian CL with respect to buildings erected during the Soviet occupation. As a consequence of the associated ‘dual property rights’, the owner of the building has to pay ‘mandatory rental payment’ to the landowner.

This situation has become known as one of ‘dualistic property’, a concept sometimes erroneously identified with that of divided property. This dual situation calls for legal reform in the relevant field, for purposes of re-establishing the principle of unity of the land and the building erected on it. The problem can be partly solved by introduction of new institutions – the long lease (emphyteusis) and the right to erect a building on another’s land (superficies). 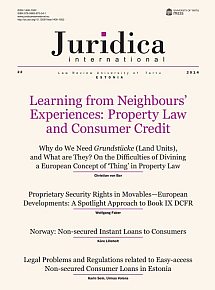