In the mid-’90s, the main issue facing Estonian jurisprudence surrounded the creation of a new legal system in the wake of the 1991 re-establishment of Estonian national independence. After Estonia become a European Union membership candidate in 1995 and then a member state in 2004, harmonisation of Estonian legislation with that of the European Union, alongside the law of the European Union itself, gained increasing focus. The harmonisation of Estonia’s law with the law of the European Union largely coincided with the intense work to create Estonia’s new legal system. Therefore, in numerous cases, there was no need for harmonising an existing act with the law of the European Union – the EU law was taken into account in the preparation of the new acts. With the new legal system mostly completed as the 2000s rolled in, our objective was no longer so much to provide an introduction to Estonian law as to participate in international discussion of important legal issues. We are very glad that the authors contributing to Juridica International include many internationally recognised lawyers, which is why the main focus of the journal has shifted from expounding on Estonian law to addressing issues of greater international relevance. The primary emphasis has been on developments in the law of the European Union, including the possibilities for harmonisation across the various fields of law in the countries of Europe *2. However, Estonian law has not been neglected. Estonia’s new legal system is special in that, in its creation, mainly for establishment of the new private law, international models, among them the Principles of European Contract Law and the Principles of Commercial Contracts, have been used as relevant sources. Therefore, the Estonian example can be utilised for monitoring the actual efficiency of the so-called sample provisions and principles – the effects in practice. The Estonian experience may, accordingly, prove interesting also for legislators in other countries. In a way, Juridica International has become a chronicle that reflects the 20 years over which a new legal system for a country has been built, in tandem with its combination with the legal system of the European Union. It enables one to observe that in today’s Europe, increasing numbers of legal issues are similar between countries, and it shows how the law has become global in nature. I am extremely pleased that the international readership of Juridica International has increased steadily throughout the years. Since January 2002, our readers have had the opportunity to access the online version of the journal, with more than 120,000 page views in 2014 alone and 70,000 online users. The following countries represent the ‘top five’ for page views generated: the USA, Great Britain, Germany, the Netherlands, and India. 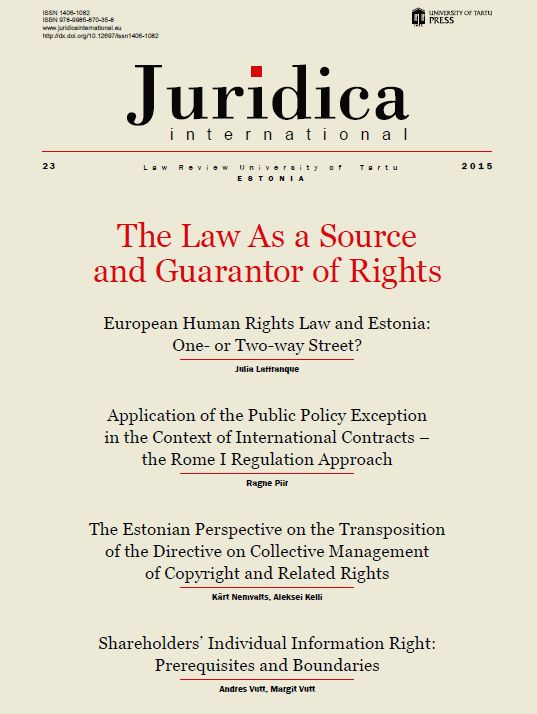