Law Applicable to Consumer Contracts: Interaction of the Rome I Regulation and EU-directive-based Rules on Conflicts of Laws

The article discusses the abundance and interaction of rules aimed at determining the law applicable to cross-border consumer contracts. Firstly, it examines whether there is a continuing need for conflict-of-laws rules that stem from consumer-related directives. It then addresses the question of whether the Estonian Law of Obligations Act’s conflict-of-laws rules comply with the consumer-related directives. Lastly, the relations between the conflict‑of‑laws rules stemming from consumer-related directives and the Rome I Regulation are analysed. The authors conclude that the level of consumer protection afforded by Rome I seems to allow for a waiver of the various simultaneously existing directive-based conflict rules. Such renunciation would not only resolve the issue of inaccurate transposition to national laws – an apparent problem for the Estonian legislator as well – but also contribute to legal certainty. While the conflict-of-laws rules of Rome I and the national directive-based rules coexist, the latter are to be considered subordinately to Rome I. The conflict rules of the Estonian Law of Obligations Act are deemed to be only domestically mandatory and therefore not to be viewed as overriding mandatory rules in the sense of Article 9 of Rome I. 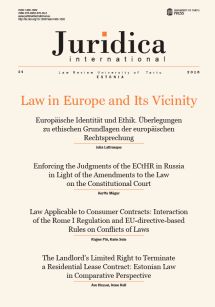