During WWII Ilmar Laaban (1921–2000) fled Estonia for Sweden where he would become an internationally known poet, translator and critic of culture. The present case study focuses on Laaban as a refugee. Its aim is to reconstruct the process of the development of his contact network with his kith and kin – relatives and close friends of the family – and describe its functioning. With this in mind I have studied the letters sent to Laaban in the years 1943–2000 both by Estonians in exile and people living in Estonia that are stored in the Laaban collection of the Estonian Cultural History Archives of the Estonian Literary Museum (EKM EKLA, f 352). Such letters of daily life were selected for study whose content revealed the writer’s family relations or close communication with Laaban. After the selection process, I studied (1) the letters’ content, while also detecting the temporal limits of the development of the contacts and the strategy of establishing them, as well as (2) the cryptic mode of writing of the correspondents which I commented on a far as possible.

On the basis of the letters analysed it appears that the first attempt to get in touch that could be related to close family and friends took place in Stockhom in 1946 when Laaban received a letter from Lilly von Pressentin – the only person from Laaban’s intimate circle who fled to the West during the German occupation. The communication that started turned out to be frequent and lasted for at least a year. There are no letters indicating any communication with the kith and kin from the following ten years. The process was re-initiated by Dagmar Normet who gave Laaban’s family in Tallinn news on his life in Stockolm after returning from a trip of representatives of Soviet Estonian creative people to Sweden in 1956. His father Eduard Laaban started to look for ways of getting in touch with his son via letter but received no reply. After several failed attempts, a successful contact was established by changing the strategy: Ilmar Laaban’s onetime nanny Minna wrote to his wife Cornelia in 1957 and received a reply. Judging by the handwriting, the letter was actually written by Eduard Laaban. In 1958 the contact between Ilmar Laaban and his family was cut off again; one of the reasons might have been connected with the fact that Eduard Laaban would pass away in 1959.

In 1984 Ilmar Laaban himself wrote to Pressentin’s daughter Dagmar Siitam, who lived in Estonia, and showed an interest in photos of family members who were already dead by then. Siitam and Laaban’s correspondence came to an end in 1991. In the 1980s Laaban started to communicate with Cornelia Laaban’s niece Külliki Suurma as is evident from letters preserved from the period 1987–1999 that are addressed to Laaban and his then partner Aino Tamjärv. Thus, Laaban’s contact network consisting of five friends and relatives was operative strarting from his third year in exile up to his final years. In four cases out of the five ut was Laaban’s friends and family who initiate and maintained the contact.

The structure of Laaban’s contact network is atypical for a refugee – it is dominated by an international segment, i.e. his communication with people who were not Estonians. Laaban also had close contacts with other Estonians in the global diaspora all that started to take form in the first months of his exile. Communication with Estonians at home, that is essentially dedicated to culture, is less prominent and more short-lived. The least developed part of Laaban’s contact network is formed by contacts with family and friends, which generally tend to dominate refugees’ contact networks.

The reasons for hindered contacts with friends and family could have been of a personal nature, but also generation-specific. Young men who headed for exile in their twenties were not particularly active when it came to re-establishing contacts – an opinion that is corrobrated by a case study on Harri Teramaa (Ojamaa 2021), Raimond Kolk’s memoirs Tuulisui ja teised. Märkmeid aastaist 1945–1950 (1980; “Tuulisui and others. Notes from the years 1945–1950”) and Käbi Laretei’s autobiographical novel En bit jord (1976; “A lump of earth”). At the beginning of their exile Laaban’s generation lived for the future; their becoming refugees coincided with the age of becoming independent, they were starting careers and families of their own. It was only when they reached a mature age that they started to look back and rediscovered an interest in their roots.

Triinu Ojamaa – PhD, Senior Researcher at the Estonian Cultural History Archives of the Estonian Literary Museum. She has published on life-writing and the Estonian diaspora and has recently been involved in the international research networks “From Past to Present: Migration and Integration through Life-Stories” (NordPlus Adult Programme) and “The Nordic-Baltic Network of Life Writing” (Nordic-Baltic Mobility Programme Nordic Culture Point). Her current research interests focus on the creative persons’ adaptation strategies in exile and the role of contact networks in it. 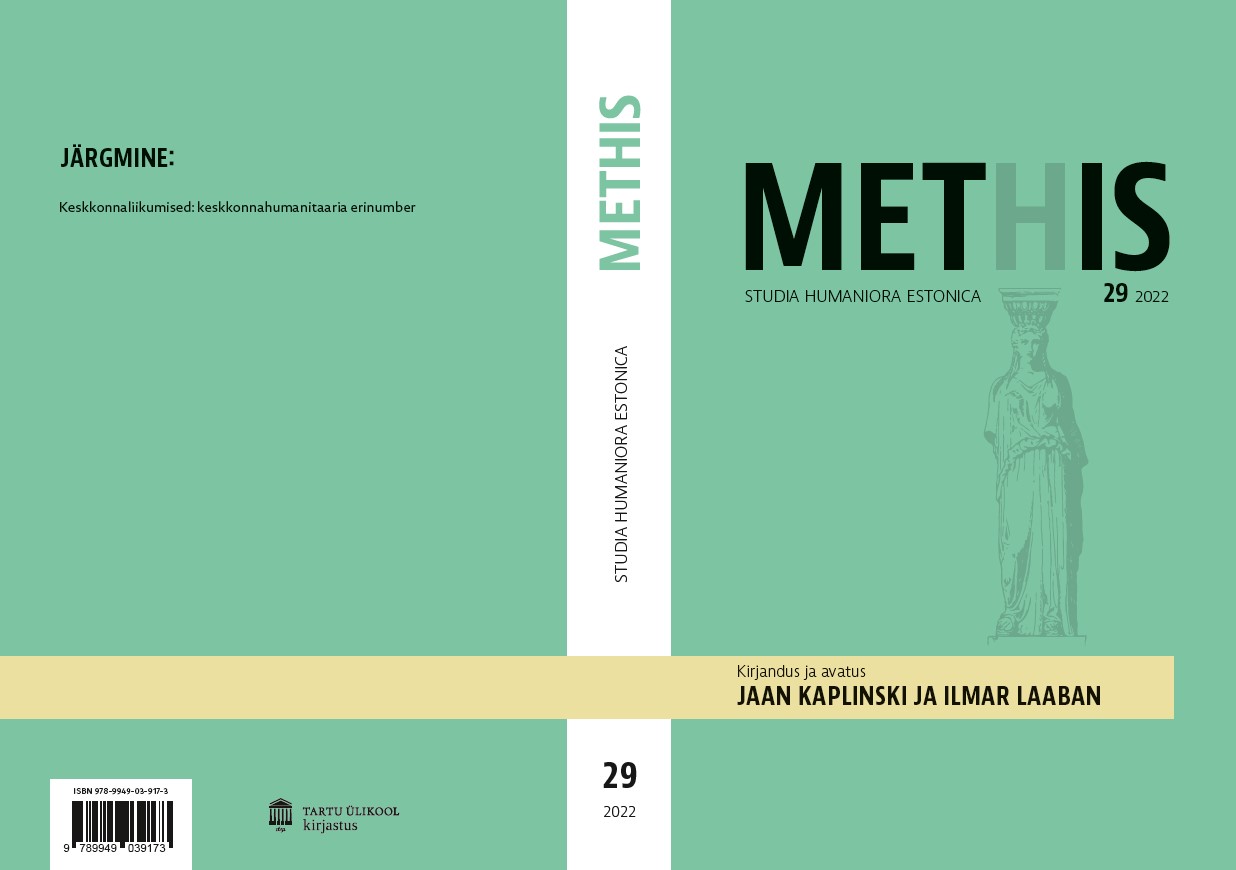