Abstract: The takeover of Estonia from the German occupying authorities in November of 1918

Although the independent Republic of Estonia was declared on 24 February 1918, the German occupation that followed prevented the actual establishment of statehood. The chance for this did not come until November of that same year when Germany’s defeats on the Western Front and the November Revolution that broke out as the expression of worsening discontent brought an end to the First World War and German domination in Eastern Europe.

The policy of the occupying authorities in Estonia was aimed at neutralising society, and in this way the Germans succeeded in preventing active resistance. Nevertheless, news of Germany’s military setbacks also reached Estonia and aroused some measure of hope for a better future. The cautious rebirth of political activity was noticeable in October of 1918. The way subsequent events took shape was nevertheless a surprise for both the German authorities and Estonian politicians.

The breakthrough started with spontaneous riots that broke out in Tallinn on 7 November arising from food shortages. These rapidly snowballed into a city-wide strike. Political demands emerged alongside demands for improving the supply of food: demands for the withdrawal of German troops from Estonia and for transferring power to the institutions of local government that had been democratically elected in 1917. News of the November Revolution in Germany reached Tallinn at the same time, triggering unrest in the city garrison. Lieutenant General Adolf von Seckendorff, commander of the 68th Army Corps and the highest ranking local administrator, was forced to seek support from Estonian politicians. As a result of these events, the Estonian Provisional Government convened on 11 November and this date can be considered the starting point of the building of the independent Estonian state.

The Provisional Government first had to take the reins of power into its own hands. This was accomplished quickly and smoothly in Tallinn and Northern Estonia, which were in the administrative area of the 68th Army Corps. General Seckendorff recognised the Estonian Provisional Government on 13 November. At the same time, Estonians took over the Provincial Government of Estonia, the Food Office, the judicial and prison systems, post offices, ports, etc. The Provisional Government appointed its proxies (deputies) in the counties and ordered the reconvening of the local county, municipal and rural municipal governments. The municipal police force (militia) that had been formed in 1917 was restored, to which the newly formed voluntary armed organisation known as the Kaitseliit [Defence League] was added. The representative popular assembly – the Maanõukogu – reconvened after an interval of a year on 20 November, and as fate would have it, Prime Minister Konstantin Päts arrived in Tallinn on the same day after being released from a camp for interned persons and took up his position at the head of the government.

Yet in Southern Estonia in the territory occupied by the 60th Army Corps, the Germans refused to relinquish power, referring to the fact that they had not received orders to this effect. A particularly serious conflict appeared to be brewing in Tartu, where Estonians were preparing a large demonstration for pushing through their demands. The Provisional Government sent representatives to Riga, where August Winnig, Germany’s Minister Plenipotentiary to the Baltic Provinces, resided, to resolve the situation that had developed. According to the agreements concluded with him, the Germans committed themselves to relinquishing power to Estonians throughout Estonian territory starting on 21 November. Even though further attempts to delay this were made in some places, from that point on, power in Southern Estonia as well was transferred into the hands of the Provisional Government’s deputies and the local governments. This process proceeded with probably the greatest difficulty on the Western Estonian islands, where a drought of information prevailed since they were cut off from the mainland. Only the future Petseri County (Setomaa) was not taken over and shortly thereaft er was subjected to the control of the armed forces of Soviet Russia.

(b. 1962) is Associate Professor at the Institute of History and Archaeology, University of Tartu 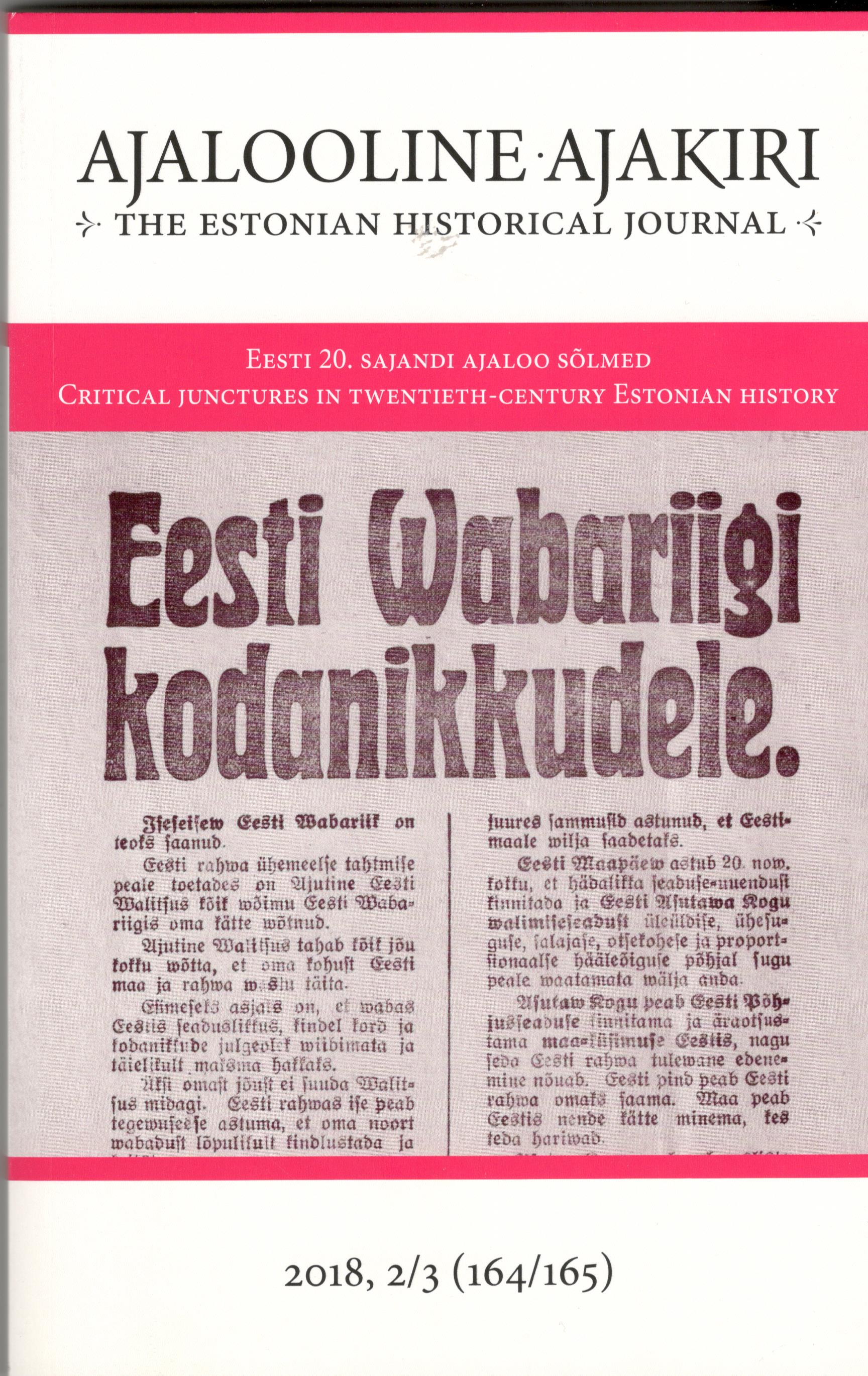